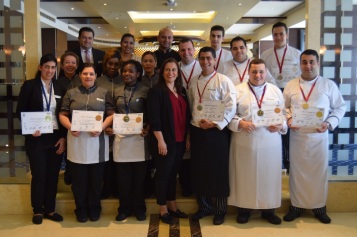 Rotana Hotels Lebanon stood out once again at Horeca Exhibition 2018, the annual regional meeting point for professionals in the hospitality and food services industries in its 25th recently held in Seaside Beirut. Just like every year, Rotana Hotels Lebanon were in the limelight, with its cooks and staff excelling in cooking, art of service, bed making, and other competitions, and acquiring medals and certificates of appreciation for their creative skills and high professionalism.

In the culinary competitions, Raouché Arjaan by Rotana’s Ali Hammoud has been awarded the Golden Medal for preparing the “Best Burger” and Ali Hijazi the Silver Medal. For his part, Ali Shehadeh has been awarded the Silver Medal for the “Senior Sandwich challenge” and his colleague Ali Kassem the Bronze one. A Silver Medal in the “Two courses Lebanese menu” contest was shared between Abbas Abboud and Tariq Baydoun separating Hussein Fakih with his silver medal also in the category of preparing “Three plated desserts”. The Gefinor Rotana has also been awarded a Silver medal by Zakaria Dbouk for the “Lebanese sandwich challenge”. Rakan Ayek was the Bronze winner for the “Burger Competition”and Samira Awdeh for the “Lebanese Manouchi with Zatar” category, Nadia Sahab and Yousef Jrab for the “Two courses Lebanese menu” competition, followed by a certificate of appreciation for Samir Chami for his multi-occasion sweet cake.

With regards to The Art of Service category, Nour Zeineddine from Raouché Arjaan by Rotana received the Golden medal, while Nour Afiouni got a certificate of appreciation as well as Ali Naim and Tariq Nayyour from Gefinor Rotana.

As for the Bed-making competition, Christy Hoven won the Silver medal from Gefinor Rotana while her colleagues from Raouché Arjaan by Rotana received the Bronze medal to include Joy Gonzalez from Gefinor and Enna Fawaz , Sara Mousa, Alicia Maristela, Margueritte Mutuwa from Raouché Arjaan by Rotana, with a certificate of appreciation for Aida Mekdad.

The General Manager of Raouché Arjaan by Rotana, Mrs. Hala Massaad, expressed her pride and congratulated the staff who are constantly amazed at their dedication to the hotel.

Rotana Hotels Lebanon participated in this annual exhibition to reaffirm its leadership in providing the best services and excellence of its employees at all levels.