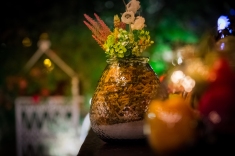 Maillon Group brings its newest Italian restaurant and cocktail bar, Sofita. A soft opening, was held, on 20 June, at Printania Garden in Broumana in presence of media representatives, influencers and food bloggers.

Sofita keeps the best part of what Italian food represents: Homemade dishes with quality ingredients. But what Sofita brings to this generous traditional cuisine is also a wave of modernity. Mixing both quality and authentic food to new recipes with a twist. Sofita offers a new Italian cuisine, Cucina Di Oggi, as it mixes quality ingredients, from today (di oggi), in a modern way.

Yasmina Yared Azoury, Owner & CEO of Maillon Group welcomed attendees saying, “We have always been in love with Italian cuisine, and with Italian culture in general. We have introduced several Italian dishes in the entities we are managing, especially in our Peruvian concepts – Cinco and Sapa – as Peruvian cuisine is greatly influenced by Italian cuisine. Those dishes have received exceptional feedback from our clients and are rated best-selling items on the menus. Given our love for Italian cuisine and our food & beverage experience, we decided to open Sofita.”